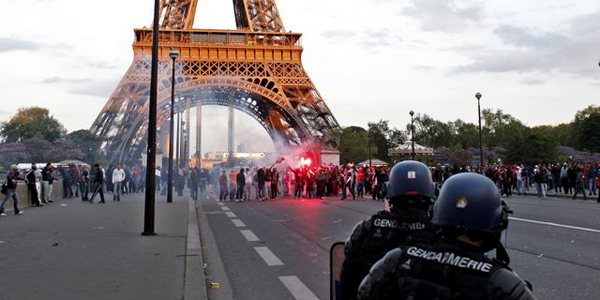 
After 19 years Paris Saint Germain won the title, only the third time in club history. The celebration was organized in the city center, Siena had to sail the winning boat in which players will greet fans and show the cup, but ...

Paris is known as the city of hooligans, almost as infamous in Europe as Zagreb, Split and Belgrade. But as Michel Platini as President of the European football organization travels throughout Southeast Europe and threatens to prime ministers and presidents of independent countries, in their own country will not do it.
PSG celebration in the center of Paris turned into 'hooligans dance'. Over 20 injured and tens arrested as a result of riots that broke down a big celebration. Imagine, they threw bottles and stones own players on the stage, and the 20 thousand people in the parade had to flee from the rampage and the police response, and ship on Siena was canceled.

Hooligans have smashed shop windows, robbing and attacked the police, they were all filmed by cameras ... Champs-Élysées looked like a war zone in which plainclothes police officers, who look like hooligans, telescopic batons beating robbers.
at 5:14 AM
Email ThisBlogThis!Share to TwitterShare to FacebookShare to Pinterest
Labels: Scandals