Atletico won the Copa del Rey, which they waited 17 years

Atletico won the Copa del Rey, which they waited 17 years 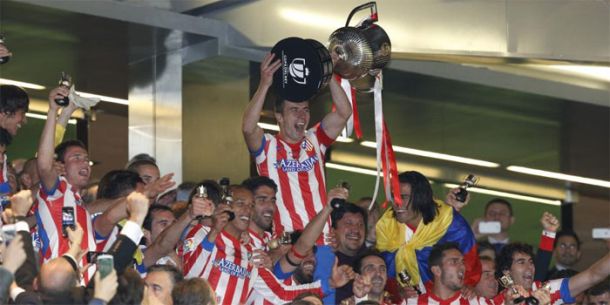 
Thus, Atletico managed to reach the trophy in Spain after 17 years, and its first victory over Real Madrid in the last 14 years. Waiting too long especially when the city derbies in question, but last night the team led by Diego Simeone managed to collect debts Kings.

Atletico's last trophy in Spain won the Season of 1995 / 1996th when they won the double crown. In the European Cup then fell Barcelona at La Romareda. This was followed by a shocking fallout of Ajax in the Champions League, and the way to the bottom of the continued fallout from the Primera.

Atletico after returning to reach the trophy in Europe, twice won the Europa League, victories over Fulham and Athletic Bilbao, and they won two Super Cup victory over Inter Milan and Chelsea. At the trophy in Spain waited until last night, and Atletico won against fiercest rivals.
at 11:53 PM
Email ThisBlogThis!Share to TwitterShare to FacebookShare to Pinterest
Labels: Atletico Madrid, Copa del Rey, Premiere