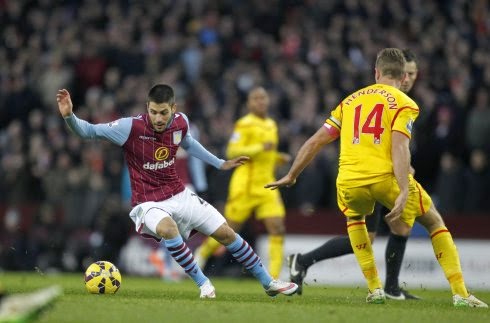 
Gil impressed off the substitutes bench in Villa's 2-0 defeat at home to Liverpool on Sunday and could make his first start for his new side against Bournemouth in the FA Cup.

Villa signed for £ 3.2million Gil from Valencia earlier in the month and Lambert claims the new addition's debut was magical.

"It's an extent it was a magic performance.

"Carles gives us something we do not have. To come on and play the way he did in a game of that magnitude lifted the whole stadium, and it was great.

"Technically he's first class and he has only been here a few days, so there'll be a lot more to come from him.

"He's excellent. We let him play with a bit of freedom to go and create and he is really enjoying his football. We do not want to put too much expectancy on him but he has fitted in excellently for us. "

Lambert also ruled out the possibility of adding Manchester City's Scott Sinclair, who has struggled for gametime with the Premier League champions.

Sinclair is desperate to leave the club after failing to break into City's team, having joined from Swansea in 2012.

"That's dead - it's not going to go anywhere. We just could not really do it, "Lambert said.