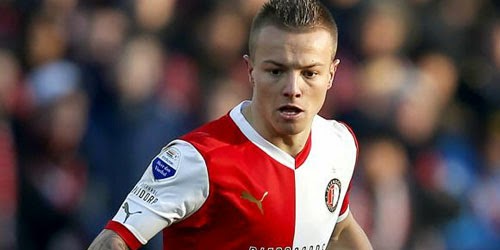 
The Rome based outfit are eyeing the 23 year old as a replacement for Paris Saint-Germain bound Lucas Biglia.

It remains to be seen whether Clasie will move to the Italian capital this winter especially since he is contracted to the club till 2018. However, should the move go through the midfielder will join his former team mate Stefan de Vrij at Biancocelesti.

Since making his debut in 2010 for the Rotterdam club the Dutch international has made over 100 league appearances scoring seven goals.

at 8:32 AM
Email ThisBlogThis!Share to TwitterShare to FacebookShare to Pinterest
Labels: Eredivisie, Feyenoord, Football rumors, Jordy Clasie, Lazio, Serie A