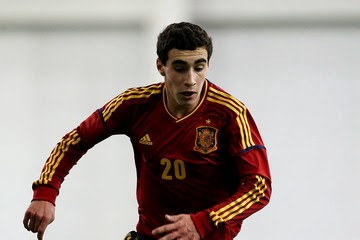 
The defender, who is just 15, has "pretty much packed his bags" and is set to join Arsenal, according to Spanish newspaper Marca.

Zabarte can sign a professional contract with Arsenal when he turns 16 in January.
A deal at the Emirates will be net him more cash than anything he'd get in Spain, where youngsters' salaries are far smaller.

Madrid Zabarte describe as a "central defender noted for his speed and strength."
Arsenal have strong links in Spain and keep a close eye on the best young talent.

Arsene Wenger tried to complete a treble deal for Lionel Messi, Gerard Pique and Cesc Fabregas when they were teenagers growing up at Barcelona's La Masia academy.

Moves for Messi and Pique failed but the Frenchman did manage to get a complete deal for Fabregas, who became a hero at the Emirates.