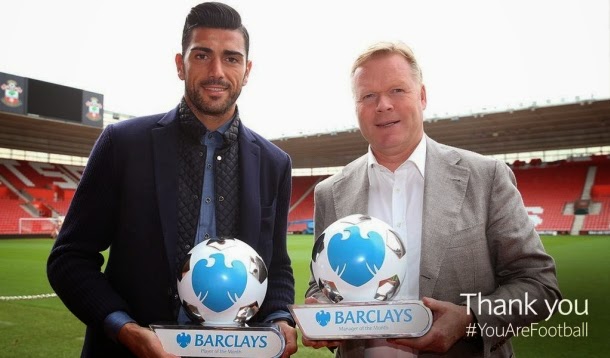 Pelle, a summer arrival from Feyenoord, scored three goals in the month of September, including a superb over head kick in his sides 2-1 win over QPR.

Speaking after receiving the award, Koeman said: "It's a nice compliment. It's an award and I knew that in England they give an award every month and they have the award for the best manager of the month and even the best player.

"We had a nice start to the season and for that, it's nice to win of course. It's a personal prize but, as we know we do it together. You need players with good spirit, good ambition and I'm proud of the players for the start of the season but we have to continue. "

Koeman was quick to praise his new forward Pelle, whose performances have since earned him his first international call-up.

"The question was could he do the same as he did in Holland Because The Premier League is more difficult to score in?" he added.

"It's more difficult for strikers to score against better defenders. He's doing fantastic, he's scoring goals but he's also an important player for us in the way we play. "

Reflecting on his first few months in English football, and on receiving the award, Pelle said: "When I came here, the first month, it was not so easy.

"It was a really big difference in a good way Because it was more difficult and a big challenge for me and I really hard to work harder than I usually do.

"To have already got the player of the month award in September is a big emotion. I have to say thanks to the trainer for giving me this opportunity to come here. "

Having lost manager Mauricio Pochettino to Tottenham and numerous players in the summer transfer window, Southampton were expected to struggle, however sit third in the Premier League.