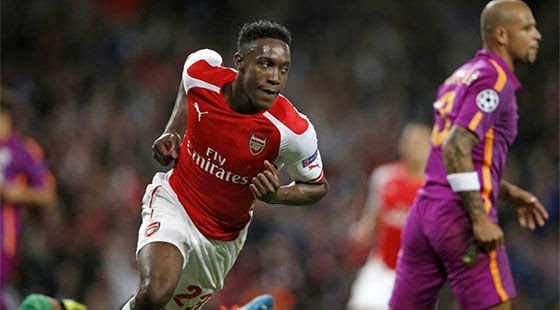 Clinical Welbeck blasted the Gunners into a 2-0 lead and once Alexis Sanchez had stretched the advantage further, the £ 16 million signing from Manchester United added his third with the Turkish club were swept aside at the Emirates Stadium


The only blot on an otherwise fine night was the red card shown to goalkeeper Wojciech Szczesny for bringing down Burak Yilmaz, who rifled home from the spot.

"Danny was on the end of good movements. It's good that he slowly gains confidence and finishes well. Hopefully the hat trick will help him gain confidence, " Wenger said.

"It always helps to know that you have a chance to play in the next game. That gives you confidence.
"What is good for me is that his team play is good as well. His team work and work rate are good.
"It's not just his finishing Because he wants to help the team.

"I believe that, technically, he's very sound. I was a surprised that he's technically clean and that he's a good passer of the ball.
"And I did not know he was so quick. Honestly, I knew he was quick but he can be electric when he starts - he has great pace. "

Sanchez was the victim of a two-footed tackle by Felipe Melo in the first half that Wenger felt should have been punished by a red card. The Chile international appeared to be upset when he was eventually substituted by Wenger.
"Yes it could have been a red, although I'll have to see it again. My first impression was that it was a red card, " Wenger said.
"When we went down to 10 men and took him out Because I wanted us to be more solid defensively.
"Fortunately in my life I have not met many players who were happy to come off.
"We had good pace on our game and the transitions were good. Danny was at the end of good collective movements.

"We had a good start and they were surprised at our pace. We lost control of the game when we went down to 10 men.

"As soon as we allowed Galatasaray to play, they became a dangerous team. But for an hour maybe our pace was a problem for them."
Wenger refused to condemn the rash challenge that resulted in a red card for Szczesny.
"We lost the ball, an unnecessary mistake in our own half, and after that it was a through-ball," Wenger said.
"I saw him coming out and I thought he may have read the situation well.
"He tried to come out and was a fraction late so he conceded the penalty. It can happen.

"I think the fact is that we 're sea guilty of losing the ball in our own half - it can be dangerous and we did not defend too well on that front."