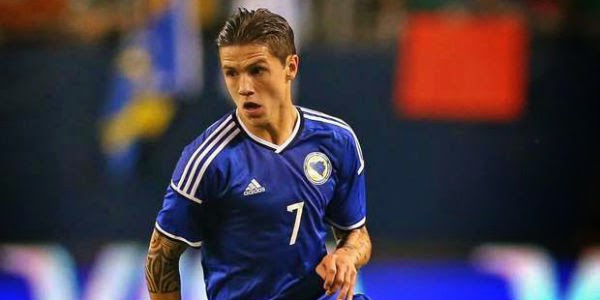 Football national team member of Bosnia and Herzegovina Muhamed Besic 95 percent is the new player of Everton. The remaining five percent may be left to unforeseen items

Besic (21) has previously been linked with Everton, but with a few others, how the English, as well as Spanish and German clubs. However, because Everton was the most persistent and most concrete and Besic, Goal.com has learned, agreed to all the terms offered and now is left only to Ferencvaros and British agreed last details of the transfer.

Besic in Liverpool waiting for the green light to be able to perform medical examinations, and the contract will be signed for a period of five years, which in itself is news, especially if we take into account the fact that in the English Premiership, perhaps best league of the world, comes from Hungarian team.

Besic last season was MVP of the Hungarian league, but only after being given a chance in the national team of Bosnia and Herzegovina, has become one of the most interesting young players in Europe.

His path to to A selection was not easy. True, he made his debut a few years ago in a match against Mexico and as one of the youngest players ever, and received the opportunity in have some matches. However, more often used in matches youth national team of Bosnia, where with Adnan Zahirovic, seemed defensive midfielder part U21 team. A great game and dedication are constantly urged him to A selection, but disagreements with Vlado Jagodić selector, denied him faster progression.

In addition, Muhamed Besic sought is club where he will play, so the amateur HSV, where he allegedly had a conflict with the coach, who is, according to German media, after an argument, and even grabbed by the neck, left in Ferencvaros, where in just two years has grown into one of the best players in the league.

Everton is recognized him, the club where Besic will have an excellent opportunity for progress, due to the fact that his coach Roberto Martinez, who is known for forcing young players.

Already is published the news on the official website of Everton that this young player to join the team in warm-up games on Thailand, and will be presented after returning from Asia.