I think I could have done better at World Cup - Hazard

"I think I could have done better at World Cup" - Hazard 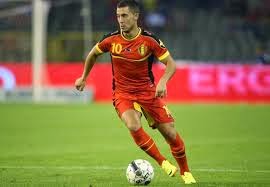 Hazard, who was voted as Chelsea's Player of the Year for last season, recently came in for praise from his national team coach, with Marc Wilmots claiming the 23-year-old can become one of the top five players in world football.

But the playmaker was disappointed with his performances in Brazil.

"I think I could have done better," he said.

"In terms of quality, I could not have been better."

Belgium lost 1-0 from Argentina in the quarter-finals of the 2014 World Cup, and Hazard continued: "We all had a big game against the USA,which left us tired.

"We are still lacking something to reach the last four, and that's called experience. I think we'll have that in a few years' time. We have to keep playing like that.

"The Argentines are used to playing games at the top level, when the tension is highest. They have the experience to make the difference with the smallest details.

"We were given a good lesson: it's up to us to learn from it. I felt that we could have done so much better, but we should hold our heads high."
at 8:17 AM
Email ThisBlogThis!Share to TwitterShare to FacebookShare to Pinterest
Labels: 2014 FIFA World Cup, Belgian national team, Belgium national team, Eden Hazard, World Cup