Disaster for the host of the World Cup in semi-finals

Disaster for the host of the World Cup in semi-finals 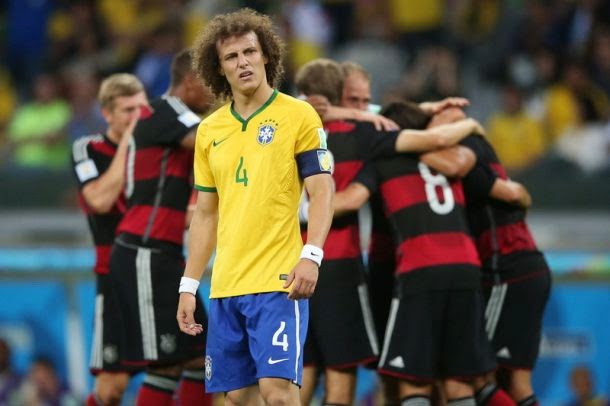 Brazil's football team tonight at Mineirao stadium in Belo Horizonte in the framework of the semi-finals of the World Cup played with Germany. Germany is celebrated with the score 7:1

Germany has from the start started without fear and very offensive, and this game them are paid off only after 11 minutes. Toni Kroos took a corner, switched the ball to the second tripod, where along was completely forgotten Thomas Muller. Bayern Munich attacker was not difficult to bring his team the lead.

Muller is from only 24 years of age came to his tenth goal in the World Cup finals in 12 appearances. Germany continued in the same rhythm after the first goal, and then came the real deluge of five times world champion.

Until his 16th goal at the festival the best teams of the world Miroslav Klose came after 23 minutes, and then went German Pancer. Already in the next attack another goal in the network of Julio Cesar.

Philippe Lahm sent the ball to Toni Kroos who sends a vicious blow to the bottom right corner of the Brazilian goal. Two minutes later  Kroos in the lead role.

Brazil has entered a lot better in the continuation of the meeting. Fred had a chance, but on the place was Manuel Neuer. Oscar had the opportunity to score his first goal for the Brazilians in 53 minutes, but again at the place Bayern Munich goalkeeper.

Until their sixth goal in the meeting, Germany could in 61st minutes. Firing Thomas Muller after assists Kroos, but secure was this time Julio Cesar. Germany is to sixth goal however arrived in the 69th minute of the match. Scorer is this time after assists Lahm was Andre Schürrle.

The same player in the main role is ten minutes later. Schürrle is with his second goal brought Brazil heaviest defeat in history, dating back to the 1920s. year and victory Uruguay over Selecao with 6:0. Brazil has finally managed to score a consolation goal, and the shooter was Oscar.