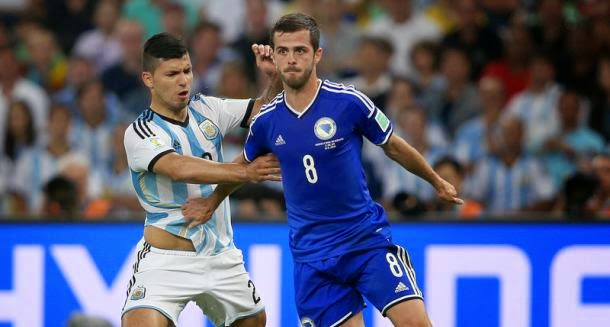 Switzerland was the first meeting of the group E win against Ecuador 2-1, while France with a convincing 3-0 beat Honduras. In their debut appearance at the World Championships team of Bosnia and Herzegovina has provided good resistance to a favorite Argentina in a match of the first round of Group F

Ecuador in the first fifteen minutes of aggressive play surprised the Swiss and prevent all of their attacks, and after a cross from the left and took the lead with goal by Enner Valencia in 22 minutes. With these results gone at rest, but after 48 minutes it was 1-1, and the goal scorer was Admir Mehmedi, who is at half time entered the game.

It seemed that we will have the first game of at championship, which will end in a draw, but the victory of the Swiss however has with goal in the 90th minute gave Haris Seferovic. Switzerland, however, is supposed to have been reached earlier to advantages, but Josip Drmić's goal annulled for a non-existent offside.

France is as expected justify the status of favorite against Honduras, although the "guests" resisted attacks Descahmps team until the last minute of the first half. Then the Palacios in his penalty crashed Pogba and caused a penalty, and also earned his second yellow card and secure actualizing penalty was Karim Benzema.

In 48 minutes we had a real debut goal-line technology, when after hitting the ball Benzema rejected by the opposing goalkeeper Valladares, who is clumsy reacted and refused the ball, and was caught behind the goal line. The win was only confirmed Benzema with second goal after 72 minutes.

Bosnia and Herzegovina in the minimum debut defeat by Argentina. The match started very badly for Safet Susic chosen ones because the Argentineans took the lead in the third minute, when they performed a free kick from thirty meters from the left, and after a cross ball from Sead Kolasinac refused in the net Asmir Begovic.

It was not too shaken the national team of Bosnia and Herzegovina, who quickly established fieldbalance and stop all attacks Argentineans, and were able to threaten the goal Argentineans, but a header after a corner Lulić, Romero with final effort throw out in the corner.

Argentine coach Sabella was unhappy with what they saw, and immediately after the first half made ​​two changes and in game introduced Higuain and Gago, but to a real change rhythm, there was only after 60 minutes. In the 65th minute Leo Messi after his classic cross from eighteen feet hit the corner of Begovic's goal and it was 2-0 for Argentina.