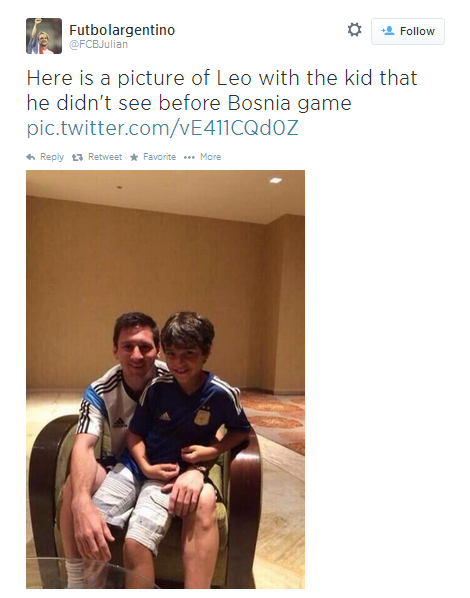 Many have wondered whether Messi accidentally bypassed the boys before the game first round Group F against Bosnia, or he is became a "jerk"

Before the first game of Group F World Cup between Argentina and Bosnia in the tunnel before taking the field both teams shook hands with the judges. Many have noticed an interesting match in which Messi bypassed a boy he extended his hand to greet him.

This video has toured the world and horrified the public, because we all know that Messi is "good soul" and a great humanist, but the public has condemned this move and unchanged opinion about the "little man but a great person."

The snub occurred after Argentina's 2014 FIFA World Cup game against Bosnia and Herzegovina on Saturday, and Messi managed to track down the kid Saturday and snap a photo with him.

It was a nice move on Messi's part, and the boy ended up getting much better moment than just a handshake.

at 12:18 AM
Email ThisBlogThis!Share to TwitterShare to FacebookShare to Pinterest
Labels: Lionel Messi, Scandals, World Cup, World Cup in Brazil