Germany convincing against Portugal, stupidity Pepe, a hat-trick by Muller

Germany convincing against Portugal, stupidity Pepe, a hat-trick by Muller 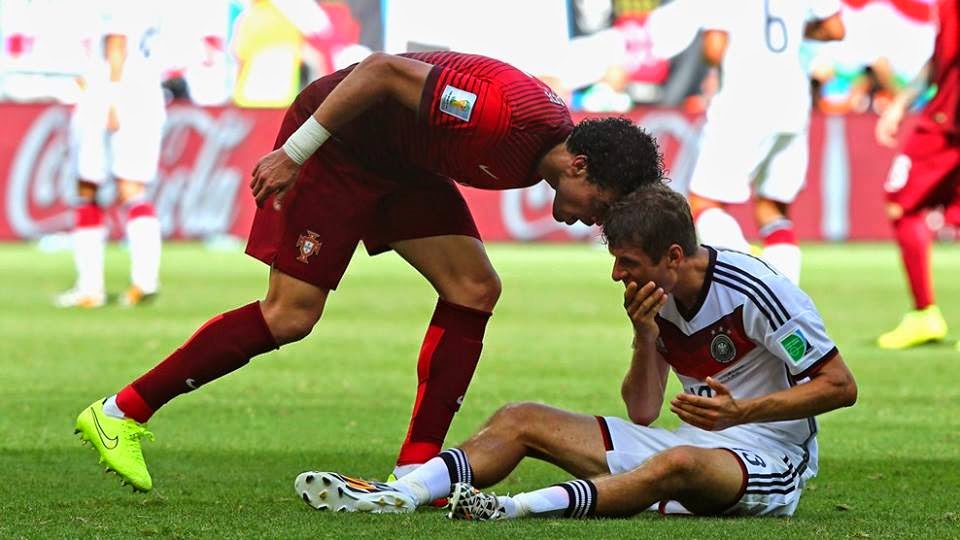 In a derby first round of the World Cup in Brazil Group G, Germany is with convincing 4-0 overcame Portugal

Already after 12 minutes the Germans come into the lead. In penalty area of Portugal was downed Gotze and referee Milorad Mažić showed to the spot. Safe of the leadership of Germany was Thomas Muller.

After that Germany continued with dominance while the players of Portugal just as and Ronaldo were empty of ideas. However, after 27 minutes Almeida stole the ball to Lahm added to Ronaldo who has kicked but Neuer managed to defend his shot.

In 32 minutes the new ball in the net of Patricio. Corner performed by Toni Kroos, has found Hummels who topped Pepe and hit for 2-0.

Pepe made ​​a big stupidity in 37 minutes. First he punched in the face Muller in a duel after that while the German guy was on the ground came up and hit him with head, and referee from Serbia Milorad Mažić him justified show a red card.

In the first minute of stoppage time of the first half Portuguese are once again drew the ball out of their net. Again Kroos has been an assistant and a brilliant goal scored Thomas Muller for 3-0.

In the second half, the Portuguese were the first to threaten through Nani but Neuer had no major problems to tame the shot.

After 60 minutes, Ronaldo tried from the free kick but hit only living wall. Just eight minutes later a brilliant counter attack performed by reservists Schürrle and Gotze, and the latter dribbled the defense of Portugal and hooked up so the goalkeeper kicked the ball to a corner.

The Portuguese were looking for a penalty in the 76th minute but the referee Milorad Mažić from Serbia today great judged just shook his hand.

And then after 78 minutes the first hat-trick in the World Cup in Brazil achieves Thomas Muller. Schürrle has passed through the right side threw in penalty area of Portugal, Patricio was a short refused ball and Muller that routinely put in a net for 4:0.

By the end there were no major excitement and the Germans are quite deservedly celebrated victory and announced that it will be one of the main contenders for the title of world champion.