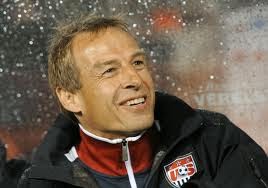 Jurgen Klinsmann has received a heavy dose of criticism for his comments about his U.S. men's national team's chances at the 2014 FIFA World Cup


On the eve of America's opening match against Ghana, though, the head coach changed his tune a bit with some rather sly comments. "I booked my flight after the final," Klinsmann told reporters, via The Associated Press.

The German-born coach ruffled some feathers in December when I said that the American national team "can not win" the World Cup and sparked a sea controversy by recently insisting that his team's chances "just are not realistic."

Yet Klinsmann finally appears to be backing away from those comments as his team gets set to start play in the difficult Group G, ominously dubbed the "Group of Death."

"We come in with the same effort, the same drive, the same energy and ambition to do well. And we want to do really well, "Klinsmann said.

The U.S. coach is aware of the high hopes that America has for its home team, and he admitted as much on Sunday by Assuring fans that he will do everything in his power to make sure his team is ready to go.

"That's why we worked more than four weeks on our preparation, we timed it the right way to give the players the confidence they need to beat Ghana tonight," Klinsmann said. "This is step one, then comes Portugal and then comes Germany. And then we'll see. Expectations... in the United States are very high. "