Americans up to three big points against Ghana

Americans up to three big points against Ghana 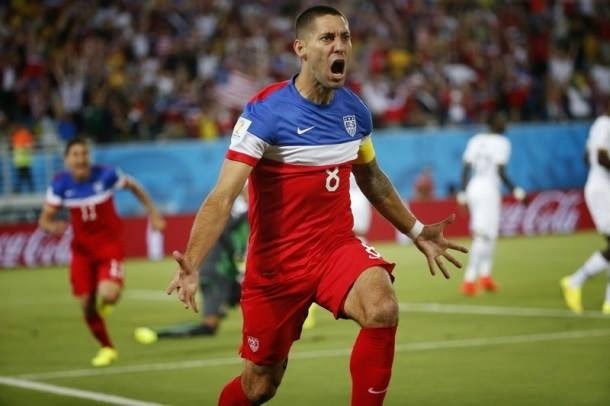 The World Cup got off to a flying start for the United States as Clint Dempsey skipped inside John Boye and fired his low shot into the net off of the post to give his side the lead after just 29 seconds.

It was a dream start for Jurgen Klinsmann’s men and the fastest goal scored in this years World Cup so far and the fifth fastest in the history of the competition.

Jozy Altidore could have made it two not long after when a low cross found him at the back post but the striker could only drive his shot into a wall of desperately diving Ghanaian defenders.

There was some bad news after 20 minutes for the United States as Altidore was stretchered off with what appeared to a serious hamstring injury.

With half an hour on the clock Ghana threatened for the first time, Asamoah Gyan found space and fired a shot at goal forcing a good save from goalkeeper Tim Howard.

Moments later Dempsey was left with a bloodied nose when he jumped for a header with Boye and was caught in the face by the Ghanaian shin. There was some initial worry that the United States’ star man would have to leave the game but after a minute of medical attention the striker rejoined the action.

Klinsmann was forced into another substitution on the other side of halftime, Matt Besler, who appeared to be nursing a tight hamstring towards the end of the first half, was replaced by John Anthony Brooks.

Ghana started to create openings and ten minutes into the second half Gyan had a chance to level the scores with a free header in the penalty area, unfortunately for the 28 year old his header was off target.

After soaking up the pressure for most of the half Ghana finally found their equaliser with just eight minutes left, a neat back heel from Gyan found Andre Ayew who fired it first time into the net.

But just when it looked like the USA had surrendered a victory substitute Brooks rose highest at a corner and dramatically headed his side back into the lead with just four minutes of normal time left.

The USA fought hard in the remain minutes and successfully defended their lead to win the game and take all three points.

Next up for the USANT is Cristiano Ronaldo’s Portugal, who were thrashed 4-0 by Germany earlier in the day, on Sunday while Ghana face group leaders Germany on Saturday.