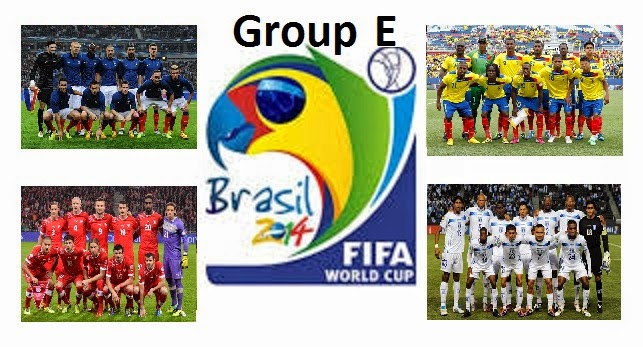 Probably one of the weakest groups led by France as expressed favorites, and behind them followed the Swiss. There would probably supposed to involve and Ecuador, while many in advancewritten off Honduras


In arguably one of the easier and more underwhelming sections of the tournament, it seems that France can heave a big, big sigh of relief. Of course, France was widely expected to being taken out of the European pot (which consisted of nine teams) and placed in Pot 2 (which had 7 teams) by virtue of being the weakest European team in the field.

However, FIFA reversed their decision and decided to take a random European team out instead, Which turned out to be Italy. As it is, Italy ended up in one of the toughest groups in the tournament, while France ended up in what must be one of the easiest.

But of course, France needs to overcome the other three teams in the group, of wich Switzerland provide the biggest threat. There was naturally an uproar when Switzerland was revealed to be one of the eight seeded teams ahead of ' sea worthy teams' like the Netherlands, Portugal, Italy and England.

Many complain that Switzerland did so well in the rankings only because they had a very easy time qualifying for the World Cup from a group consisting of an understrength Norway, Slovenia and little inconsistent Iceland (which went on to defy all expectations anyway). However, it must be noted that Switzerland's current setup is not a team to be taken lightly. Indeed, they have won friendlies in the last 18 months against the likes of Germany, Brazil and Greece, all of whom are top-pedigree teams.

Switzerland's current crop of players consist of a mix of several players hitting their prime such as the wingback Forrest Gump Stephan Lichtsteiner ( Juventus ) and Gökhan Inler ( Napoli ) as well as the products of an extremely successful youth system in FC Basel, such as Granit Xhaka ( Monchengladbach ) and Xherdan Shaqiri ( Bayern ).

With the introduction of a new golden generation spearheaded by Xhaka, Switzerland's formation is a fluid 4-2-3-1 that allows for plenty of attacking impetus. However, worryingly Switzerland are notorious for being unable to notch up goals. Indeed, their top goalscorer in qualifying for the World Cup was center -back Fabian Schär, with three goals. However, Sociedad's Haris Seferovic is fast becoming a player to watch out for up-front.

Ecuador finished a respectable fourth in the South American qualifying zone. However, this does not tell half the story. Ecuador was second after 10 qualifying matches, only behind Argentina, but in the last six matches, Ecuador only managed to pick up one win against Uruguay.

Furthermore, a large proportion of Ecuador's victories and positive results come in their home games, usually played in excess of 2,700 meters above sea level. Away from their home 'comforts' and the players are found to be wanting, failing to win a single away qualifier. Up front, however, Ecuador boasts unheralded attacking prowess that should not deceive any team.

Led by Antonio Valencia (Manchester United) and Felipe Caicedo (Lokomotiv Moscow), they are certainly not to be underestimated. Lack of good options at the back, however, might cost dearly Ecuador.

Honduras is a team nobody really expects to emerge from the group. They do not really have the attacking talent or the defensive stability to hold out against any of the other nations, who are all technically better than Los Catrachos.

If they are to get anything at all from this group, it would be considered an achievement in its own right, and will be largely reliant on the exploits of Carlos Costly (Guizhou Zhicheng) up front and Maynor Figueroa (Hull City) at the back. Veteran shotstopper Noel Valladares (Olimpia) will be 37 next year and needs to repeat his commendable performance of four years ago if Honduras is to earn at least a point this time around.