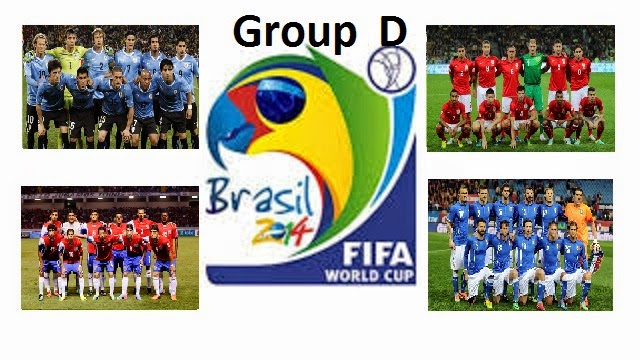 Three of the four team in this group are former winners of the world championship trophies, but will one of these three selections have to say goodbye to this tournament after the group stage


On paper, Group D appears tough, especially for everyone’s favourite laughing-stock, England. Uruguay looks to be a fading force and will most definitely not replicate the fourth-placed finish of the 2010 World Cup; yet, they still boast a fantastic squad, with the excellent triumvirate of Luis Suárez, Diego Forlán and Edinson Cavani leading the line.

Luis Suárez has been in excellent form this season, already having scored 13 goals in just 9 games despite his lack of sharpness due to his suspension. Edinson Cavani has been in similar form, having already scored 10 goals, while the evergreen Diego Forlán has been impressive for Internacional.

Beyond the strikeforce, Uruguay still boasts a pretty good team, with the likes of Diego Lugano, Fernando Muslera, Nicolás Lodeiro and Gastón Ramírez. Yet, there are certainly doubts about the team, with its ageing defence and lack of pace likely to be exposed. It’s highly unlikely this team will ever come close to its success in 2010, but we’re definitely looking forward to Uruguay meeting England.

Costa Rica, meanwhile, is almost definitely going to be the whipping boys of the group. Little is known about this team which qualified for the World Cup by finishing second in CONCACAF, only behind USA by four points.

Apart from captain Bryan Ruiz who plies his trade in the Premier League with Fulham, much of the team is made up of relative unknowns. Key players are reported to be Keylor Navas, their goalkeeper who kept seven clean sheets through qualifying, and promising young Arsenal striker Joel Campbell. It looks, sadly, like this team would be going to Brazil just for its excellent beaches and holiday resorts.

England is as interesting a team to discuss as ever, because of the massive amount of paparazzi that follows it everywhere. Team-wise, England has individual talent like Jack Wilshere, Wayne Rooney and Steven Gerrard, but has historically failed to gel as a team and play well.

Roy Hodgson also is untested at this level with a team of England’s stature, and his lack of a clear playing style is definitely something to worry about especially when pitted against the likes of Italy or Uruguay. Most importantly, this England squad can only do well if it overcomes its habitual bout of histrionics; as Didi Hamann put it in his autobiography (an excellent read, by the way), England cannot win until it stops treating a 5-1 win over Germany in a qualification match as the best result of the decade.

Definitely talented but also extremely prone to collapse, this England squad needs to get its act together if it wants to progress anywhere.


Italy looks to be the favourites to qualify in this group, with its exciting possession-based football and attacking talents sure to light up the World Cup. Led by the controversial Mario Balotelli, Italy’s array of talents include Stephan El Shaarawy, Marco Verratti, Giuseppe Rossi and Daniele de Rossi, all excellent players at the highest level of club football. Led by one of the most respected managers in Italian football, Cesare Prandelli, Italy are bound to qualify. Runners-up of Euro 2012 and third at the Confederations Cup last year, Italy is certainly on its way up.