Road to Brazil: Drogba and company defeated from Bosnia and Herzegovina

Road to Brazil: Drogba and company defeated from Bosnia and Herzegovina 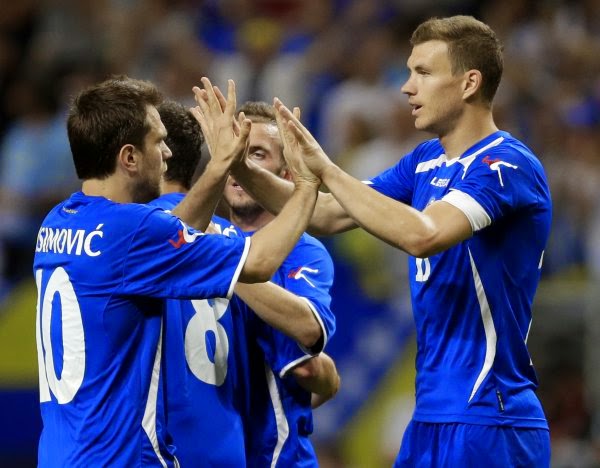 Honduras controlled the tempo in the first half, Roger Espinoza and Jerry Bengtson came close to scoring for Los Catrachos however, they were unable to finish their chances.

Terim brought on left-back Caner Erkin and right-back Gökhan Gönül at half-time. The substitutions had an immediate impact as Honduras were unable to deal with Turkey down the flanks.

Almost all of Turkey's chances came down the wings with Erkin and Gönül doubling up with İshak and Ahmet İlhan to carve open the Honduras defence.

İshak setup Mevlüt Erdinç for the opening goal in the 70th minute and Erdinç provided the assist for Erkin's goal in the 83rd minute.

In tonight's match both teams are on their way to the World Cup next month, and this game gave each side a strong test ahead of the tournament. We can say that the weakest spot on the field was Ivory Coast's defence, which used Edin Dzeko and scored two goals.

The game was open in the first half, and there was a couple of chances on both side. First in 4th minute shot Max Gradel but Asmir Begovic is on right place. On other side in 11st minute big mistake by African's team defence but goalkeeper Sylvain Gbohouo defend easily.

Another mistake in the 17th minute on Coast's half. After Edin Visca’s subsequent shot was blocked by Gbohouo, Dzeko followed up on the rebound to bury the chance, putting Bosnia ahead 1-0.

There was more chances, but first half ended without changing result. It is worth to mention that Salihovic enter the game early becouse Kolasinac feel the pain in the fnee.

In the 53rd minute Dzeko scored second goal as he received a pass at the top of the box from Pjanic, pivoted on his first touch and fired it past Gbohouo.

Ivory Coast looked much better after Drogba's entrance, and his skill finally paid off in second-half stoppage time, as he hit a free kick from just outside the box that Begovic could not get to.

Next match Bosnia and Herzegovina will play on Tuesday against Mexico marked as a friendly, while Ivory Coast play another match in framework of tournament "Road to Brazil" against El Salvador on Wednesday.