Pjanic: The goal is to pass the group stage in Brazil

Pjanic: The goal is to pass the group stage in Brazil 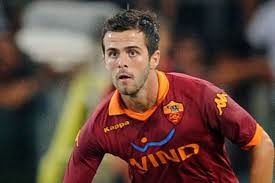 At one point of the match, while Pirlo performed free kick for Juventus, Chiellini struck Miralem Pjanic elbow in the face, after which he fell to the ground. He saw the main refree of the match Carmine Russo, but not sanctioned player "Old Ladie".

"I'm sorry that it happened. Do not like talking about other players, but I felt a blow to the head and there was even blood. Destro was suspended four games, we'll see what will happen in this case," said Pjanic, and then touched the World Cup:

"Our goal at the World Cup is to pass the group stage. We have a good team and we believe we can pass the group. At the World Championships there is no easy opponents, all matches are tough. Teammate and I will do everything to make rejoiced our country," said Pjanic after match with Juventus.

at 2:44 AM
Email ThisBlogThis!Share to TwitterShare to FacebookShare to Pinterest
Labels: AS Roma, Bosnia and Herzegovina national team member, Miralem Pjanic, Serie A