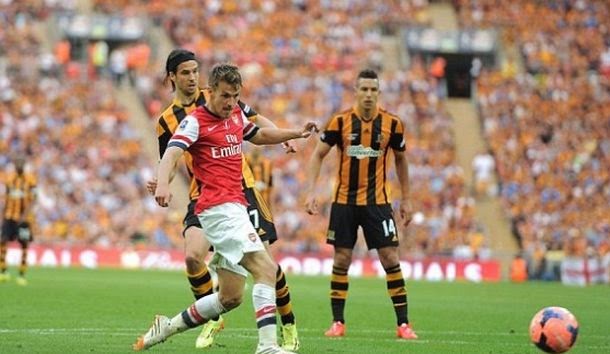 Fantastic FA Cup final played at Wembley Arsenal and Hull City, and at the end are Gunners after extra time won with the score 3-2, and after nine years won the trophy

Hull opened the game on an amazing way with two goals in the the first eight minutes of the match. To the lead Hull arrived after four minutes of play when James Chester fantastic heel sent the ball into the net for a 1-0 advantage.

Hull continued to shock Arsenal in their opening game. Bruce was in the eighth minute shook the post, to in the following actions sent the ball into the net Curtis Davies for the amazing lead of Hull 2-0.

Another great opportunity had Hull and in 13st minutes. Alex Bruce has shoted by head, but Gibbs threw the ball from the goal-line.

Arsenal managed after 17 minutes to get back into the game. Santi Cazorla hit a fantastic from the free kick to reduce advantages to 1:2.

The pace of the game in the first half was fantastic. Both teams had several excellent attempts towards opponent goal, but to result is not changed to halftime, and remained 2-1 for the Tigers.

Continuation of the match brought the dominance of the elect Arsenal. Hull focused on counter-attacks from which they were particularly dangerous. The attacks are to Gunners paid off in 71st minutes. Frenchman Laurent Koscielny has used crowd in the penalty area, and struck for level the score at 2-2.

Incredible miss had Kieran Gibbs in the 79th minute. He found himself alone in front of goal McGregor, but from only seven feet to kick over the crossbar. Then Hull goalkeeper saved the ball Giroud and dimination of Gunners to finish was fruitless, and entered into overtime

Arsenal was better and in overtime. They attacked, and they all paid off in 109th minute when Aaron Ramsey hit for big celebration and Arsenal win 3-2.