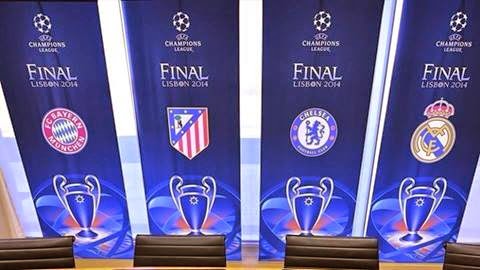 Main Draw Doubles semi-finals took place today in Nyon. In the draw have been found two teams from Spain and one from England and Germany

Football players of all teams that play in the semi-finals of the Champions League are aware that every opponent in the finals most elite club football competition is extremely difficult. Thus, on the eve of lottery Koke said:

"I do not have any particular desire. Whomever we get will be difficult, they are all great teams," words are footballers Atletico. Agreed with him and Bayern Munich footballer Franck Ribery:

"I do not think a lot about who we get. These are all great teams and it will be very difficult to play with them," the words are Ribery.

Real Madrid footballer Gareth Bale believes his team can fight place in the final against each other three opponents. "I think we can win each of the remaining opponents, but it will be a big fight," said Bale.

According to many, the best coach Jose Mourinho is considered today how in the semifinals is everything possible. "Everything is possible in the semis. Sure that we have a great opponent, but we believe in success," said Mourinho ahead of the lottery.