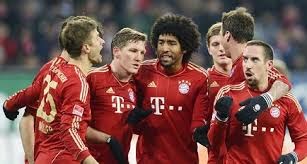 The lineup of this year's semi-finals were completed Atletico Madrid and Bayern Munich. Atletico at home defeated Barcelona 1-0, while Bayern Munich against Manchester United won 3-1

In Munich we will largely be able to watch the replay of the first leg from Manchester. Bayern again in the first half dominated by barren without any real threat for De Gea's goal, while the other side is only a good opportunity for guests selfishness ruined Wayne Rooney, who did not want to pass the ball completely lonely on ten meters from the goal Shinji Kagawa.

Manchester United took the lead again in the same, 57 minutes, as well as in the first game. This time the shooter was Patrice Evra with great blow to the crossbar from the edge of the penalty area after a cross from the throw of Valencia. And this time Bayern started playing serious football after receiving a goal and this time they got the tying goal even faster, already in the next attack. He threw Franck Ribery and his head scored by Mario Mandzukic.

For nine minutes later it was 2-1. This time, from the right side is a grounded ball threw in Robben and ahead Vidic score by Thomas Müller. United's captain was too slow in 76 minutes managed to see off or Arjen Robben, who was shot from fifteen meters, and Vidic is only impede job David De Gea, turning the ball into his own corner of the goal for the 3-1.

Atletico Madrid is in a great match against Barcelona won 1-0, and the only scorer of the match was Koke in the fifth minute.

First shot by Adrian Lopez, after whose shot the ball hit the post and the same player is rebounded ball his head below the action switched to Koke, who scores from close range in the wing.

Had and Atletico after a few attempts, and in the 11th minute David Villa hit the post. A minute later and a good opportunity for the visitors missed Messi, who is head shot wide. and in 19 minutes domestic again strike frame of the goal, this time in the opportunity was David Villa and shaking off the crossbar Pinto's goal.

After 23 minutes, Neymar assists for Messi, but the Argentinian again misses. By the end of the half the ball was a little more in the legs guests, but the result is unchanged.

Neymar and Xavi had in the same action on the opening of the second half, but still with no results, since the Brazilian instead of shot trying to dribble Courtois, the Spaniard managed to switch the entire goal from five meters. In the 59th minute another great chance for the visitors, but again is a little imprecise Xavi.

Another good opportunity for the guests had Neymar, whose header goes wide, while the domestic opportunity to confirm the passage had Gabi and Raul Garcia, but even they were not precise enough, so that remained 1-0 for the domestic, which is first win one of these two teams in each other's meetings this season, but the win valuable semi-finals of the Champions League.