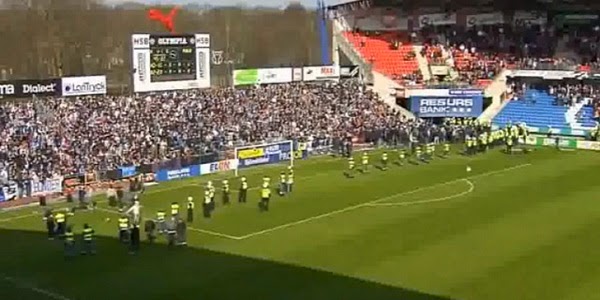 In Sweden, the tragedy happened at the opening of the football season, Djurgarden fan was killed in a fight before the match with Helsinbgorg. Then followed the riots at the stadium and the match is canceled

The Scandinavian countries are not usually the ones to mention when talking about the hooligans, but Sunday 30th March 2014th, will remain black letters inscribed in the history of Swedish football. The derby match between Helsingborg and Djurgarden was canceled due to riots in the stands.

The hooligans who hide behind the name of Helsingborg previously were in a fight inflicted fatal injuries Djurgården supporter. As soon as the tragic case heard in the stands began to riot in the stadium, and fans, according to Swedish media reports, getting off the ground, but police quickly forced back into the stands.

Fan died in hospital from injuries.

However, the conditions for the continuation of the match was not. Terrific start of the football season in Sweden.