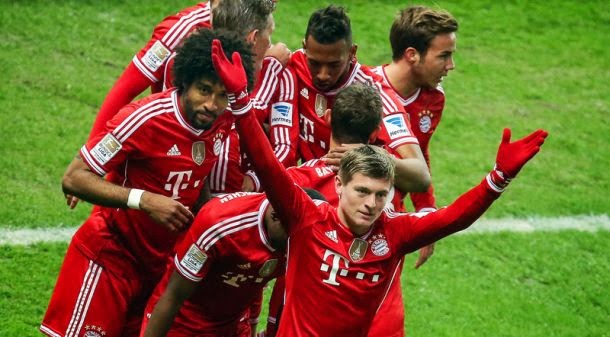 Only 27 rounds were needed Bayern to defend the title in Germany. Seven rounds before the end of the championship victory against Hertha Berlin and mathematically reached new titles

Bavarians are also remained and 52nd consecutive game undefeated in the Bundesliga, and the celebration in Berlin 3-1 moved forward to second-placed Borussia Dortmund on 25 points unattainable. Guardiola's team this season in the Bundesliga, enrolled in as many as 25 wins and just two draws with fantastic goal difference 79-13.

Against Hertha they had no problems. Already in the first 15th minutes Bayern run away at 2-0 by goals from Toni Kroos in the sixth and Mario Götze 14th minutes, and it was clear in which direction the match would go.

Guardiola's team held the ball possession, was significantly more dangerous, however Hertha brought a dose of entertainment in the 66th minute when through their top scorer Adrian Ramos from penalty reduced to 2-1. However, in the 79th minutes, Franck Ribery raised to 3-1 and removes any uncertainty.

Wolfsburg has reached the valuable three points in the battle for European positions victory in Bremen 3-1. by a similar scenario as Bayern, Wolfsburg soon made a priority goals Malanda in the second and Croatian player Ivan Perisic in the tenth minute. Perisic scored in the rush from the edge penalty area leaving home keeper Wolf without any chance.

However, the host is already in the 16th minute reduced to 2-1 and was trying to get below a full return to the game. That did not work either, and the match was completely resolved in 80 minute when Arnold raised to 3-1.

In derby in Dortmund between domestic and Schalke was not goals, continuing the close race these two teams for second place while Braunschweig arrived to hopeful victory points against Mainz.