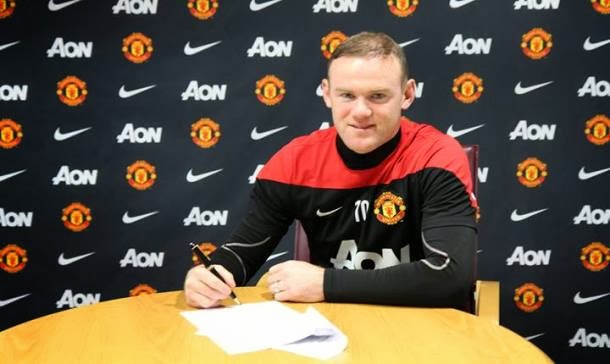 English team Manchester United tonight confirmed that the England international Wayne Rooney signed a new contract, according to which in the ranks of the club from Old Trafford remain until the end of June 2019th year, until after retirement to become an ambassador of this club

Twenty-eight-year-old striker has arrived at Manchester United from Everton in August 2004. year, and for United has since played 430 matches and scored 208 goals, which came to fourth place the eternal scorer of the club.

"Wayne is the best footballer ever since I included him in the first team Everton 2003rd year. Since I last summer became Manchester United manager I enjoyed working with him and see how he developed his incredible talent. With his skills, experience and desire to success, he is a key part of my plans for the future and I am absolutely thrilled because he accepted the challenge." said David Moyes.

"I said back in July that Wayne has a great opportunity to become a true legend of the club with a long and rich history. Lack him only 42 goals to overtake Sir Bobby Charlton as the club's first goalscorer and became the first United player to reach 250 goals for the club. Such opportunities to show only special players and I am confident that he will set a new record, which will last for decades." Moyes added.

"I was born to stay at United. In August will be ten years since I arrive in this club, and during that time I've played with some fantastic players and won all what I had expected when I came here. Now I have the opportunity as one of the most experienced players in the club to help the younger players to break through and be a part of another great United team." said Wayne Rooney.

"The fans have always been a big part of this club and the support they have given me since debut against Fenerbahce was fantastic. I am very grateful to all United fans around the world for their continued support.'m really excited to be part of the future of this club and I want to thank David Moyes and Ed Woodward for their trust and support.'m convinced that this will be the beginning of another successful chapter in the history of Manchester United." Rooney added.