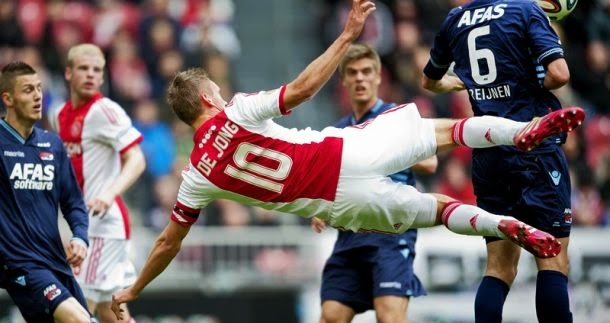 Ajax, a leader in the Netherlands, hosted in Amsterdam, AZ Alkmaar and escorted guests with four goals. Two scores Duarte, one De Jong and Kishna.

For the current champions it was the 16th win of the season and currently have 54 points, seven more than Twente who plays derby against Feyenoord. AZ remains on 10 wins and in seventh place with 34 points.

Vitesse came on third place after a certain victory over Waalwijk (3-1). Havenaar, Qazaishvili and Atsu were the scorers for domestic reversal, given that the guests by goal Anderson led from 14th minutes.

It is worth adding that earlier Utrecht, with missed penalty, defeated Groningen 1-0. The only goal of the match was scored in the 88th minute by Martensson.

at 8:14 AM
Email ThisBlogThis!Share to TwitterShare to FacebookShare to Pinterest
Labels: Ajax, AZ Alkmaar, Eredivisie