Will PUMA bring Falcao to Arsenal?

Will PUMA bring Falcao to Arsenal? 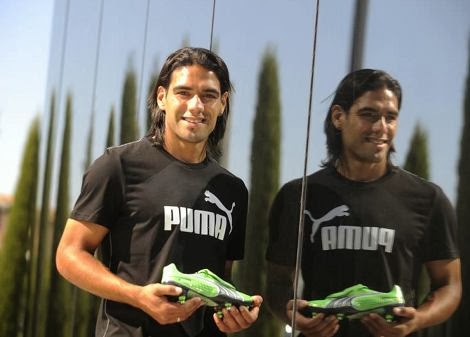 After 20 years wearing Nike gear, the English Premier League club Arsenal signed a new sponsorship deal with Puma worth 180 million euros, which is the largest such contract in the history of English football

Agreement between Arsenal and Puma will run from June of 2014. to June 2019th year. 'Gunners' will annually belong 36 million euro, five million more than the record so far contract on the 'island' which Manchester United have with Nike. Mention how Real Madrid has a contract with Adidas by which 'Royal Club' annually gets 37 million euros, while Barcelona from Nike gets per season 34 million euros.

Arsenal became the third English Premier League club that has a contract with Puma after Cardiff City and Newcastle United. The most popular clubs in Puma's 'family' and the European vice champion Borussia Dortmund, as well as the Italian national team, and the fastest man in the world Usain Bolt. The club from North London was last changed supplier of sports equipment in 1994. year, when they moved from Adidas in Nike wing, and before them the equipment supply the Umbro.

"We signed the largest contract in the history of the club. Part of the money for sure we'll take on reinforcements" said Executive Director Ivan Gazidis declaring that the 'Gunners' offer a new contract Arsene Wenger (64) who leading club from 1996th year.

"Wenger has always had our support.'ll Sign a new contract with him, and when the time comes, we will go out with him in public," said Gazidis. During his stay on the bench Arsenal Wenger has won three championships of England, and four FA Cups, but the last trophy came in far 2005th

This is another generous sponsorship agreement that is signed by Arsenal in the last 14 months. In December 2012th 'Gunners' have signed an agreement with Emirates worth 170 million euros. Under the agreement the Emirates will have advertising on the jersey until 2019. year, while the stadium will be called the Emirates Arsenal to 2028th

A great financial situation at the club opened various speculations about possible reinforcements. Loudest mentioned the arrival of the attacker Radamel Falcao from Monaco. The Colombian star has a private contract with Puma and a new sponsor of Arsenal will do everything to make it out of the Principality 'moved' in London.