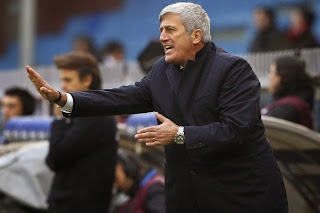 The Roman club yesterday announced that has terminated the contract with Petkovic, arguing that he violated an element of trust in the contract, reported Italian media

He claims that he did not break the rules, because his contract with Lazio valid until June, while the Swiss national team will not take over until July of 2014. year.

Lazio had to resign Petkovic before appoints new coach Edy Reja, who will then be able to lead the team on Monday in the match with Inter.


''We have received a notice of cancellation. We will appeal the decision all legal means, because we think this is injustice, "said Petkovic's advocate Paco D'Onofrio to Sky Sport Italia.

''In fact, neither statement is not stated that the rule was violated by negotiating with the Swiss Federation. President of the Association coach Renzo Ulivieri also said this week that Petkovic has not made ​​a mistake. None rule does not prohibit a coach to achieve an agreement with a third party when he was nearing the end of the contract. In addition, Petkovic has signed for the national team, not for a rival club'' he added.


Failure occurred after failed attempts to terminate the contract on mutual pleasure, and after reportedly not accepted the offer Lazio that Petkovic pays just 100,000 euros, instead 600,000 how much would have earned that he remained at work until 30 June.