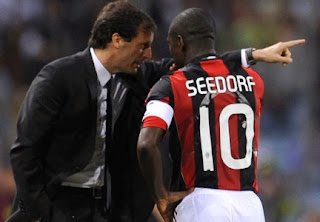 Dutch football player and member of the Brazilian Botafogo Clarence Seedorf said today that he will become the coach of the Italian Milan
News that Clarence Seedorf already now become the new coach of 'Rosoneri' confirmed the legendary Dutchman, to whom will sure to delight all fans Milan.

"My next step is the takeover Milan replaced. This is a difficult decision, but I am satisfied with what I have so far achieved in a playing career."

"The final decision I have made today during the day ... last night it was difficult to decide," said Sedorf.

In the management said that Milan replaced Seedorf with the club yet to sign a contract, and that he would arrive in Italy on Thursday, although previously there was an agreement that he is only at the end of the season take over the club.

37-year-old Seedorf will on the bench Milan replaced Masimiliano Allegri.

Dutchman is in his playing career played in Milan from 2002nd to 2012th years, and has won two Champions League, Series A and European Super Cup.