Who is the greatest threat for the carriers of the groups?

Who is the greatest threat for the carriers of the groups? 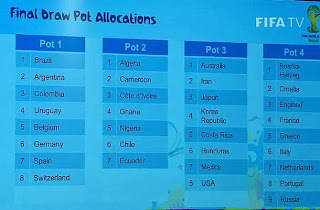 
Drawing of groups for the Mundial in Brazil will be held on Friday, but today we found out case, the power of the group. In the first pot are hosted Brazil and the seven best ranked teams by FIFA ranking.

Pots are made according to the geographic key except the first, in which, as we said, placed the best representations of the world with host the World Cup, the team of Brazil.

In the "European", the fourth pot is nine teams. However, one of the teams from that pot on Friday to be moved into another pot.

"This is a decision of the Executive Committee. We talked with the presidents of all the guilds. This is a draw and we'll pull out. Let's not talk about that," Blatter told a reporter's question about the reasons for the unusual system, according to which in one pot seven, and in other nine teams.

at 12:02 PM
Email ThisBlogThis!Share to TwitterShare to FacebookShare to Pinterest
Labels: World Cup