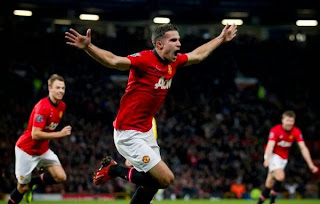 Tonight the Isles echoed the news that Robin van Persie requested to be placed on the transfer list, and the reason for such a desire Dutchman cited Moyes methods of work and the fact that the attacker had an agreement with Sir Aleksa Ferguson which a Scot transgressed

Manchester United at the given moment there is no season what were they successful from the era of Sir Alex Ferguson, but there is no doubt that the "red devils" still no one scrapped from the fight for the title.

It seems, however, that David Moyes fails to establish a system that has adorned the club earlier years from "Old Traford" as witnessed by the latest news that has echoed the Isles tonight.


Sources close to Manchester United transmitted to the British media that Robin Van Persie handed over the request to be placed on the transfer list for several reasons!

Other sources state that the Dutchman unhappy Moyes approach as for the Manchester evening News confirmed and Rio Ferdinand.

"The new manager does not practice to informing us who will find on the ground the evening before the game. This affects the psyche of players because they focus more on whether they find on the ground or instead to concentrate on the game," said Ferdinand.


And speculated that Robin Van Persie is dissatisfied with the fact that it was Sir Alex Ferguson deceived on the issue of withdrawal from the bench Manchester.

Apparently, during the negotiations that led Manchester with Van Persie when he was still at Arsenal, Ferguson promised not to leave United in the next few seasons but already after the first in which he worked with the Dutchman retired.


That was directly influenced on the results Manchester United in the current season and many are inclined to claim that "devils" will fail to get their hands on the Champions League next season, which would for the players as Van Persie was a big blow, although it is still early to make such reviews .

Possible destination Robin Van Persie is team Juventus that _ wanted him during the summer 2012th when the Dutchman decided to move to Manchester United.


On the other hand, Van Persie's goal that gave to Arsenal less than a month ago celebrated in a way that does not testify about that he is unhappy at United, so at the given moment, only those who are really familiar with the events on "Old Traford" can give the answer to the question whether the Dutch internationals really wants to leave Manchester.