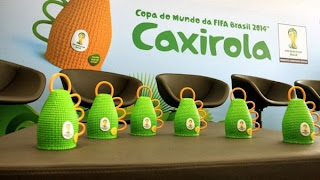 If you thought that with the end of World Cup in South Africa placed complete story with instruments from the stands causing nervousness at players and spectators over the TV follows matches, you're wrong. In Brazil are waiting for us kashirolas

New World Cup, a new instrument that will upset us from the stands.

Just when we thought that goes into the history of the and the noise thus ending story that hits everyone the normal human in central nervous system, their is replacements arrived in the Brazilian style.


It is a kashirola, plastic punnet that are filled balls and generating sound simple mixing or shaking.

The sound of "herd of elephants" that are emitted by vuvuzelas will be replaced with the sound of which would be characteristic of a "herd of rattlesnakes."


Kashirola declared for the official instrument of the World Cup in Brazil, so you have enough time to take in the coming months to get used to them in order during the next summer, your mind was calm on the happenings on the ground and not on the irritating sound of the new official instrument Mondial.

at 6:36 AM
Email ThisBlogThis!Share to TwitterShare to FacebookShare to Pinterest
Labels: Interesting, kashirolas, World Cup