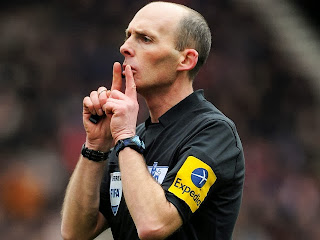 If we consider the statistics from recent history, "Gunners" have many things to hope for when them justice shared this man

Last night was expected spectacle at "Emirates" between Arsenal and Chelsea, instead of that we watched one of the most boring, if not the most boring game in the Premier League this season.

From exciting moments we saw Lampard shot in bar, Giroud good opportunity and that's about it.


However, there was also debatable details, Wenger believes that the referee Dean had to show to the white point when Wallcot fell in the penalty area after contact with Wilian.
Arsenal fans complain on forums and social networks that the penalty was also when Obi Mikel struck Arteta, and that Ramires and Ivanovic deserved red card.

Mike Dean has remained silent on all these details, and shortly after that is showed table in which can see the teams from the top much better pass from "Gunners" when he shared justice.

From the 2009/10 season, Dean judged to Arsenal 15 matches, and was achieved only one triumph.

It is known that this judge last season on the match 26th rounds of Premier League where Arsenal outclassed Tottenham 5:2 seen one very interesting detail.


Mike Dean in an unusual way he saw goal by Luis Saha for leadership "Spurs" by 1-0 in the fourth minute, and everything looks like he that goal in some way and celebrated.
at 10:42 AM
Email ThisBlogThis!Share to TwitterShare to FacebookShare to Pinterest
Labels: Arsenal, Chelsea, English Premier League, enko football, football news, Mike Dean, Premiere League, referee