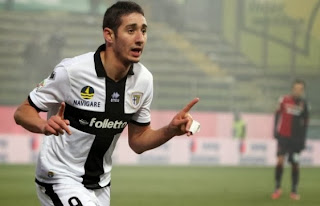 West Ham manager Sam Allardyce is looking at the prospect of bringing Inter Milan starlet Isaac Belfodil to Upton Park on loan in January, in an attempt to ease the club's attacking woes

The Hammers are currently just above the drop zone, and have struggled to find the net in the league this season, having scored just 14 goals in 17 games so far.

Belfodil is considered as one of the top transfer targets for the club, with club-record signing Andy Carroll sidelined for the first half of the season.


According to Italian newspaper Gazzetta dello Sport, Belfodil is expected to consider his options during the winter transfer window, having started for the Nerazzurri in just one league game, since his move from Parma during the summer.