Iran stays without a great expert on the eve of the World Cup?

Iran stays without a great expert on the eve of the World Cup? 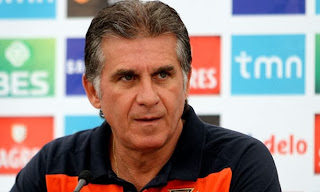 Carlos Queiroz, the Portuguese expert and coach of the Iranian national football team, has expressed a desire to sit on the bench of Tottenham and replace his compatriot, Andre Villas-Boas

Queiroz has already worked on the island - he was assistant manager Sir Alex Ferguson at Manchester United, and now the Portuguese expert announced that he could return to England on the bench Tottenham Hotspur.

"Of course I want. I respect Tottenham. My dream is to return to English football and I was very happy when I worked as an assistant coach at Manchester United," said Queiroz.

The Portuguese is currently coach of Iran. If offered him a job, there is complete capabilities that will have to say goodbye to the selector function when it Spurs or the Iranian Football Federation demanded. However, it is unlikely that the Portuguese will miss the World Cup.

Recall Iran is qualify as a first in Group A of Asian qualifying with 18 points and play at the World Cup in the group F with Argentina, Nigeria and Bosnia and Herzegovina.


at 12:56 AM
Email ThisBlogThis!Share to TwitterShare to FacebookShare to Pinterest
Labels: Carlos Queiroz, coach, national team of Iran, Rumors, Tottenham