Del Piero has not forgotten guess goals from the free kicks

Del Piero has not forgotten guess goals from the free kicks 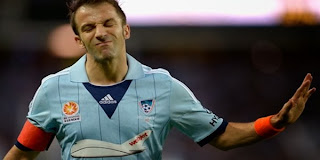 Italian veteran and member of Sydney FC, ​​Alessandro Del Piero scored a great goal in his team's defeat of Brisbane Roar score of 2:5 in the 12th rounds of the Australian A-League

Fifth placed Sydney FC is with goal by popular Alex took the lead against first ranked Brisbane Roar in the 11th minutes. Del Piero is adjust sighting device and nicely hit from the free kick.


But then came the turnaround guests, who are with goals Broich, Petratosa in the 23rd, 35th, 78th and Pranjic in 93rd reversed conceivably result in their favor, and the second goal for the domestic in 94th minute scored Garcia.
Del Piero this was the fifth goal in nine appearances in the Australian A-League, and his team in fifth place in the rankings with 18 points, and with six wins and six defeats. Brisbane Roar is leading with 27 points.