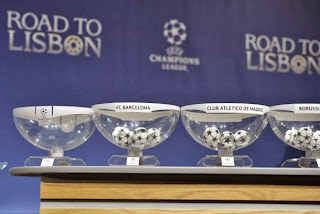 European champion Bayern, Dortmund a vice champion, Spanish giants Real and Barcelona, but also great Atletico, with English Chelsea and Manchester United, as well as PSG, which is much more invested they get opponents in the knockout stage

After completion the group stage of the Champions League, today are drawn in Nyon couples nakaut phase.

Couples eighth finals of the Champions League 2013/2014 are: