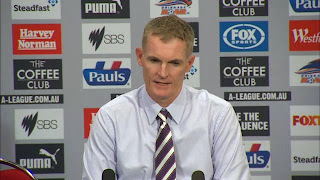 After a weak performance in the first 10 rounds of the Australian league, and won only 12 points (three wins, three draw and four defeats), Perth Glory's management decided to fire coach Edwards.

Owner Tony Sage, interrupted very early contract that was signed on three years. As one of the reasons, besides poor results stated and forcing his sons Ryan and Cameron compared to more experienced players.


"That is one of the major problems ... It's a perception problem." Sage said.

"When he did that at the time I said to him it would be a perception problem and your kids are going to be the ones to suffer on this because if we do not win every single game you are going to get criticized.

"What we have to do is find out his reasoning for not giving some of the other players a chance ... Find out why he has not he played (Adrian) Zahra sea or why he has not played (Isaac) Cernak at all this season. "

Kenny Lowe, who is so far been assistant coach, will take the bench until they find an adequate replacement. In the consideration is taken Ex-Glory coach Mich d'Avray as well as Chris Coyne and Graham Normanton.
at 12:27 PM
Email ThisBlogThis!Share to TwitterShare to FacebookShare to Pinterest
Labels: A-League, Alistair Edwards, Australia, Perth Glory