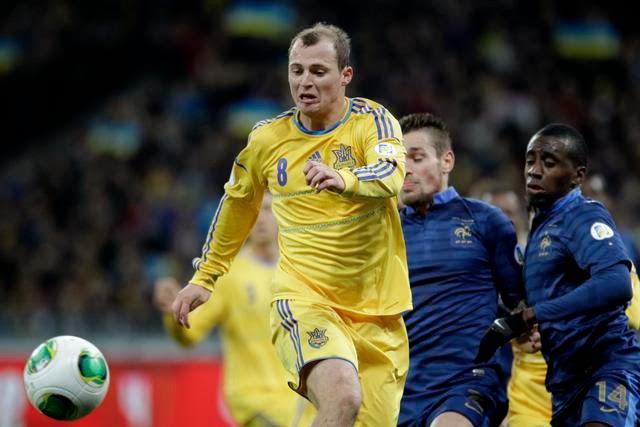 In the first barrage matches for World Cup in Brazil, the hosts have made large capital before a rematch. Ukraine has overcome favored France 2-0, while Greece was better than Romania with 3-1


The French are apparently entered too confident in the match with the Ukrainians, who showed them teeth and on the rematch wearing large capital.

Since the beginning of match Ukraine was a better rival, they created more opportunities in the first half, but we did not see score until halftime .

Second halftime continued as the first ended. Ukrainians continued to pressure, while are the favorites on paper were unrecognizable.

In the 61st minute what happened has long "hanging in the air." Zozulya, one of the best individuals of the match, which was fled Koschelny and defeated Loris.

France was then she realized that it must take the initiative in the coming minutes. However, on several occasions in the closings action their attackers did not react well, so they left without equalization.

In the 75th minute Abidal broken down Zozulya in the penalty area, but the judge remained silent, despite great pressure footballers Ukraine. However, only 5 minutes later after a similar challenge Koschelny showed on the white spot.

Jarmolenko performed the penalty, his shot bounced off the crossbar into the goal and Ukraine took the lead 2-0.

Terrible match for France concluded Koschelny, who received a red card for unsportsmanlike start over Kucera.

Maybe surprisingly, the largest number of goals seen at the match between Greece and Romania, the host is celebrated from 3:1.

Mitroglu brought Greeks the lead in the 14th minute, after a free kick that brought Salpingidis.

Just 5 minutes later, a great shock for the local fans. And Romania has achieved a goal after a free kick, Bogdan Stanchu was the highest in jump and checkmated goalkeeper of Greece.

Greece did not give up, and as soon as he started again from the center again is back lead. Salpingidis is brilliantly accompanied the action Torosidis who centered on the ground, was in the right place and scored the second goal for Greece.

The final result set is Mitroglu with his brilliant half-volley in the 66th minute.

Costin Lazar is on the end of the match got two yellow cards at intervals of four minutes, and so defeat Romania have done even worse.

Ukraine and Greece, with the added advantage of traveling to France and Romania in a rematch, and delivered a very difficult task their opponents.
at 11:51 PM
Email ThisBlogThis!Share to TwitterShare to FacebookShare to Pinterest
Labels: barrage for World Cup, France, France national team, Qualification, Ukraine, Ukranian national team