Tony Popovic is not satisfied with the exclusion of Juric

Tony Popovic is not satisfied with the exclusion of Juric 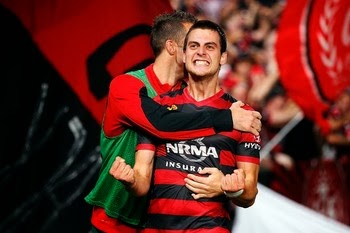 After earning a yellow card in last week's Sydney derby, following his sliding tackle that swept Sky Blues keeper Vedran Janjetovic off his feet, Juric was perhaps lucky not to be sent off for his challenge on Adelaide's Isaias Sanchez


The 22-year-old striker has already delivered a very quick return on the Wanderers' investment, scoring three goals in his first four A-League games at his new club.

Two of them came at Pirtek Stadium on Friday night, with his brace sealing a 2-1 win over his former club Adelaide, who must be wondering why they let him go last season.

But Popovic, never one to flippantly deal out compliments, was reserved in his praise of his recruit.

"I think he's still got a long way to go," Popovic said. "You can see the boy can score.

"I wouldn't say he had a good game but he scored two goals which is his job."

His strong start to the A-League season has put him in prime position to get a Socceroos recall when new coach Ange Postecoglou names his first squad next week for the friendly against Costa Rica on November 19.

But Popovic was reluctant to talk up his star striker and insists life at the Wanderers will keep him grounded.

"That won't be difficult (keeping him grounded)," Popovic said.

"He'll be the same as the rest of the group. The players will take care of him; he'll come in to our next session and start preparing for our next game like everyone else.

"He's fitting in nicely and he understands the way we work."