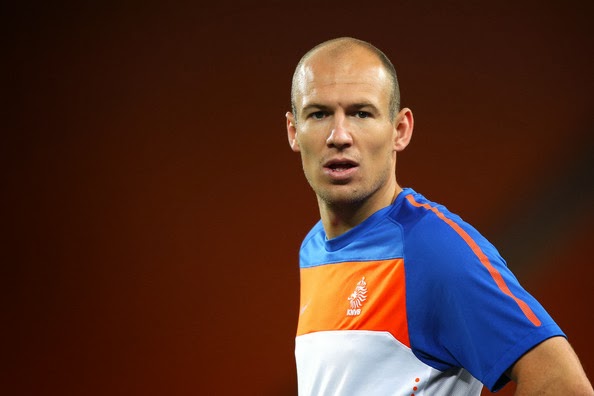 
Robben, who was a part of the Netherlands line up that lost the 2010 final against Spain, is confident that they can win the countries first ever World Cup.

He told a press conference, ”Our goal is to become world champions in Brazil. It’s a realistic target and we won’t go there with the attitude to just see how far we can get.We must survive the group stage and if we progress, the world title is our dream.”

Netherlands face Japan on Saturday in a friendly, which will see Robben start the game as captain following Robin van Persie’s withdrawal through injury.

Robben added, ”These matches are not about getting points, but they’re important. It’s an honour to be captain of your country, It’s the most beautiful thing.”

“I don’t feel extra pressure, maybe a bit of positive pressure. I know what people are expecting from me.  I won’t change because of the captaincy. I will stay myself.”

at 6:23 AM
Email ThisBlogThis!Share to TwitterShare to FacebookShare to Pinterest
Labels: Arjen Robben, Netherland