Hoeness wept from happiness because of the support he received

Hoeness wept from happiness because of the support he received 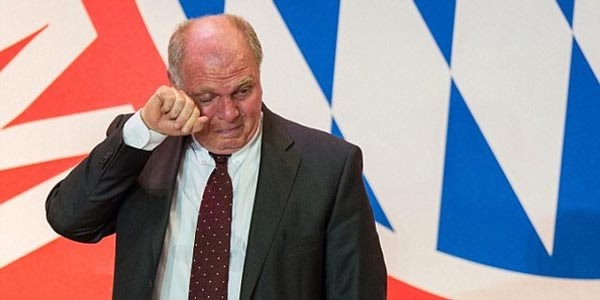 Although the media crucified him in public, Uli Hoeness steadfastly stands at the head of the legendary German club, which has had a year from dreams


Specifically, Bayern won the triple crown, became the state champion, and won the European Cup, and thereby achieve the best financial results in the long history of the club 113 years.

At the Annual Assembly of the club, which is Uli Hoeness several times rewarded with thunderous applause gathered members, failed to restrain tears while his team leaders praised and extolled as the most responsible for the brilliant financial balance.

Loud shouts of 'Uli, Uli' some 4,000 gathered members in the Audi Dome Arena, Hoeness has received public support, although he made it to the public pillory for alleged tax fraud. And Hoeness commented on the whole situation.
"I made a big mistake that I did not report the tax on foreign payments, but I did not from the country brought hundreds of thousands of euros. I am going to face with consequences. "Said the man who was at Bayern for 40 years, first as a player, coach and president.

"I have confidence in the Bavarian judicial system, I hope that will be the whole story completed in March. If you allow me to remain at the club, I promise that I will serve Bayern as long as I breathe. "Said Hoeneß through tears.

Otherwise, Bayern achieved a total traffic from 330 million pounds, as opposed to 278 million from the past season, and when that figure to add traffic realized over the Allianz Arena, has risen to a record 362 million.
at 5:47 AM
Email ThisBlogThis!Share to TwitterShare to FacebookShare to Pinterest
Labels: Bayern Minchen, Bundesliga, Scandals, Uli Hoeness