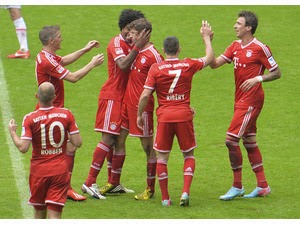 German treble winners FC Bayern Munich today set a new alltime Bundesliga record of 37 unbeaten matches across seasons as they beat FC Augsburg 3-0 at home at the Allianz Arena in Munich to strengthen their grip at the top of the Bundesliga as Borussia Dortmund lost away to VfL Wolfsburg.

The new longest Bundesliga unbeaten streak by Bayern Munich is now a match longer than the old record set by Hamburger SV in the years 1982 and 1983 with 36 matches.

From these 37 unbeaten matches, Bayern Munich have won 31 matches and only drawn six, which shows the Bavarians domination and strength over the German league in the last couple of seasons.

Pep Guardiola came and replaced Jupp Heynckes in the summer, and even under the new Spanish coach things haven't changed much as Bayern Munich have only lost one match across all competitions in the new season.