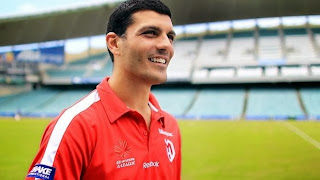 Australia is in the fourth group for drawing groups for the World Cup in Brazil 2014th, and local media have already begun to calculate, whom would be best to pull Socceroos in the group

Some local media as the best group to their team see together with Switzerland, Greece and Algeria, however, there are those who wish the national team of Bosnia and Herzegovina.

John Aloisi and Ned Zelic, former Australian team members and former captain Sydney FC  Mark Rudan have expressed their wishes, whom would like to see in a group with Australia at the World Cup.

"We have little experience with Uruguay and we know what we can expect from them. I think that Bosnia and Herzegovina would not be bad. Always want to play with teams that do not have a lot of experience playing at the World Championships," said Melbourne Heart coach, Aloisi.

Recall, Bosnia and Herzegovina for the first time s at some big competition, but many have a fear if they draw them in the group at the World Cup, primarily because of their offensive duo Dzeko - Ibisevic.

at 6:07 AM
Email ThisBlogThis!Share to TwitterShare to FacebookShare to Pinterest
Labels: Australia, Bosnia and Herzegovina national team, World Cup