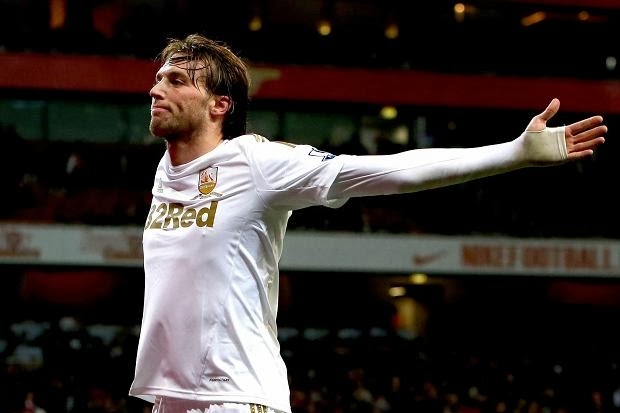 Forward Michu justify his value by becoming the national team member of Spain. President Swonsea will not let him in less than 30 million pounds


President Swonsea, Hugh Jenkins, said that the invitation that Michu play for the national team of Spain in the upcoming qualifying matches for the World Cup confirmation of its value, and the justification for the price of 30 million pounds.

"We saw the story about Tottenham and Gereth Bale that every player has a price below which no sales. We are not in such a position as Tottenham, but they have sold the best player. However we are realistic from that side speaking, but we will not allow to lose the best player, "says Jenkins.

Because of that, and call in the Spanish national team Jenkins thinks that we should not allow a player to leave the club for less money.

"I think that Michael was right when Michus concerned, when you look at the prices in the market. A call to the national team of Spain still price increases, "said President Swonsea.

Jenkins added that he is aware of Michus values ​​for team, which is located on the 15th place in the Premier League.

We know that we have a very talented player, and of course we want to keep in our team.

Certainly, a great significance for Swonsea, that our players to play for the national team of the world and European champions, because of his great games in the Premier League in the previous season, "concluded Jenkins.
at 4:54 AM
Email ThisBlogThis!Share to TwitterShare to FacebookShare to Pinterest
Labels: Transfers