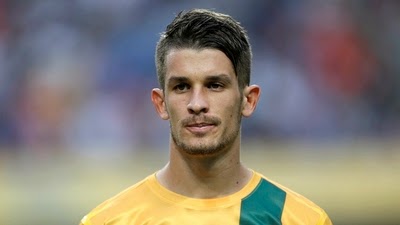 
The 26-year old midfielder from FC Sion is in the current Socceroos roster for upcoming friendlies with France and Canada but suggests looking ahead to Brazil in 2014 is probably not a good idea at this stage.

"It would be a dream come true but not thinking too much about that at the moment," Vidosic told AAP.
"There is still a long way to go.

"First of all, look after the body and stay clear of injuries.

"Then play the best we can and create as many headaches as we can for Holger (Osieck).

"You know straight away with the players France have that it's going to be a great test. They've won World Cups and European championships ... these are the challenges you love as a footballer ... and to take another step towards Brazil."

at 1:48 PM
Email ThisBlogThis!Share to TwitterShare to FacebookShare to Pinterest
Labels: Australia, Friendly