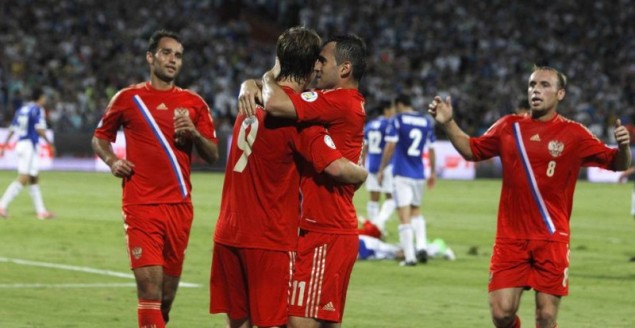 In the Group F of the European Qualifiers for the 2014 World Cup, Russia hosted and defeated Israel this afternoon with a 3-1


The result was built in the second half with the Russians scoring first thanks to defender Vasiliy Berezutskiy (50 ').

Only two minutes later came the moment of the match with a spectacular curved shot from Alexander Kokorin. On the 74th minute, Denis Glushakov made ​​it 3-0 for the home team on the rebound of a missed penalty by Roman Shirokov.

Israel got one back with a fine header by Eran Zahavi (90 ') but it was too late to make a difference in the match. Russia is first in Group F with 18 points, one more than Portugal.

The Russians still have to play two games against Luxembourg and Azerbaijan but given the opponents ranking, Russia is clearly the favorites to finish first in the group, although they will be the away team in both matches.

at 1:28 PM
Email ThisBlogThis!Share to TwitterShare to FacebookShare to Pinterest
Labels: Qualification