Seattle Sounders flying with Martins back in action

Seattle Sounders flying with Martins back in action 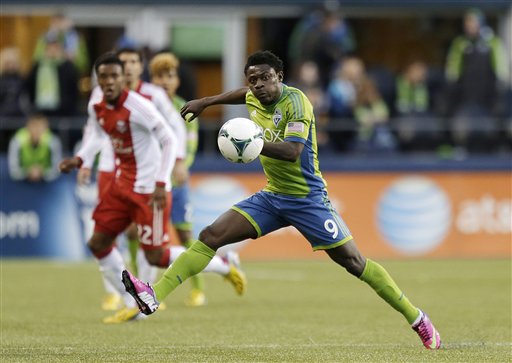 
Clint Dempsey and Eddie Johnson are away with the USA national team and will step straight back into a team who have won four in a row.

To add to that, Obafemi Martins got through the 2-1 win over Chicago Fire on the weekend after returning from injury and the current state of the playing roster is something that really EXCITES head coach Sigi Schmid.

"He made ​​it through yesterday yesterday. He felt alright this morning, so we felt it was going to be pretty good. I checked with him and he felt fitness-wise, as well, he felt okay, "Schmid said.

"I think he tired a little probably 70th or 75th minute in, but he's still dangerous and the other team is still worried about him, so that's why we left him on. He came through two days of practice well.

"Getting both back onto the team was another fresh set of legs, so I think the depth of our team has been good and guys have been called upon have stepped up and played."

He added: "We'll get Johnson and Dempsey back. We'll see how many minutes they get on Saturday against Mexico, what type of game it is, how physical it is, et cetera.

"They're going to be flying across country on Saturday, so we got to measure all of that as well. Certainly figuring that and maybe, keeping our fingers crossed, there's an outside chance Brad (Evans) might get back on the field. "

at 12:37 PM
Email ThisBlogThis!Share to TwitterShare to FacebookShare to Pinterest
Labels: MLS news