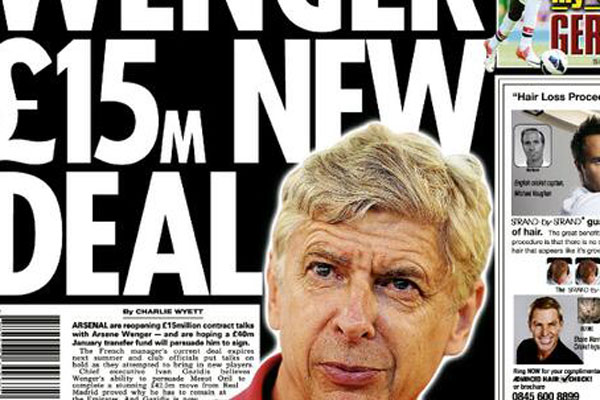 Although not yet played for Arsenal, a German is the main reason why Wenger will extend his stay at Arsenal


Arsène Wenger will probably stay at Arsenal, and the people who sought his head now could to support a new contract that will be offered to him these days.

Specifically, the Frenchman has an obligation under Arsenal until summer 2014th Mentions Paris Saint Germain, but the desire of Arsene Wenger to continue the job at Arsenal. Fans were against it to be offered a new contract this season if they do not win a trophy.

However the arrival of Mesut Ozil's all changed, and now the club is confident in the ability of Wenger to attract great players, and the fans were born a new optimism.

Although Germany's not yet debuted, the euphoria that has been made is also connected to Wenger's stay, the fans suddenly agree with the plan that the club, regardless of the results of this season, the manager is offered a new contract.

The main operative Gazidis with the blessing of the majority owner Kronk preparing offer for Wenger. It should be a two-year contract that earns 15 million pounds, which is slightly more than it is now per season.

In addition, there is a transfer budget for January, money that Wenger has not used this summer.

It is the sum of 50 million euros, which could be exploited for an attacker who is still missing, "Gunner."

In addition to Wenger are the key players, Wilshire has already announced that it would consider other offers if the manager goes, a similar thought a couple of football players who have emerged under Wenger.
at 1:06 AM
Email ThisBlogThis!Share to TwitterShare to FacebookShare to Pinterest
Labels: Premiere League