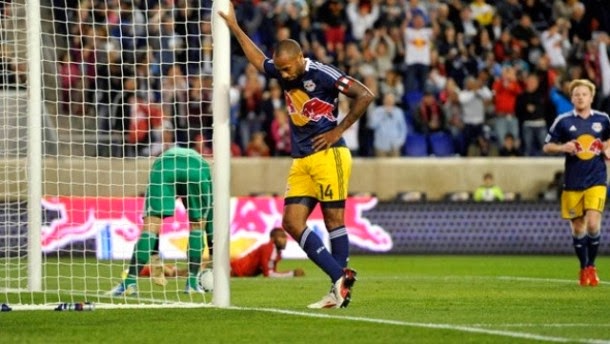 Footballer New York Red Bulls Thierry Henry, over the weekend on the match against Toronto he scored, a celebration of the same has become a hit on the Internet


It was Henry's 400th anniversary goal of his career, and celebrates it's just that, as it is to score goals something quite normal. In fact, for him probably is.

Specifically, the Frenchman after a goal in the 38th minute nonchalantly leaned on post, and is propped by leaning left while his team mates are running forward.

By the surname the former Arsenal legend, this style of rejoicing was named "Henrying".

Although at first glance a simple celebration became interesting to many on the 'net', and on the social networks can find numerous photos were done in image editing software.

"This morning I became aware. The guys showed me a large number of images and on the end of the day, we can say that it is laughable. There was no intention at the celebration, but really. I just needed a rest. I stood there, I saw the post, just as I stepped in Houston. And that day I saw the post and that was it, I simply stood beside. Now everyone joking with a picture of my celebration of the internet, I am happy and satisfied because it is laughable, "said Henry the day after the game. See how the phenomenal striker scored the 400th anniversary goal of his career. Beside New York Red Bulls, Henry played for Monaco, Juventus, Arsenal and Barcelona. For the French national team he played 123 times and scored 51 goal. In his career has won everything that can to win, a total of 19 trophies.
at 3:26 AM
Email ThisBlogThis!Share to TwitterShare to FacebookShare to Pinterest
Labels: MLS news

Too good Henry ! a long life at pushing the football in the nets. When does he retire ? No Pension Plan ?